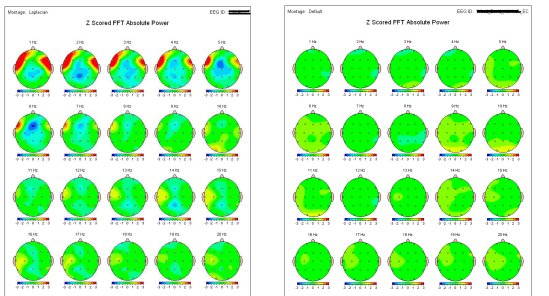 This person sustained a typical Coup-Contrecoup Traumatic Brain Injury in a car accident 1 month ago vs. normal brain activity. The initial impact was to the left frontal area; it knocked the brain against the opposite side of the skull and caused bruising in two places. Red color in the maps indicates significantly increased slow wave activity (Delta and Theta) in the Frontal regions. This slow wave activity is elevated more than 3 Standard Deviations above the norm.

The emergence of the field of Neuroplasticity has changed the way Neurologists and Neuro-scientists think about recovery to a brain injury. Norman Doidge in his landmark book: The Brain that Changes Itself: Stories of Personal Triumph from the Frontiers of Brain Science (2007), has provided us with a readable and inspiring account of the new science of Neuroplasticity. The case studies are remarkable and bring hope to the notion that brain injuries are not permanent. Neurofeedback is playing a key role in helping those with injured brains, from accidents or strokes, regain some or all of their lost functions. Watch a video that describes the neurofeedback process.